A water supply line for a house in Southeast Queens recently broke that was only a year old. As most water lines last for over 50 years this break raised some suspicions. Typically a leak on a new line is caused from outside events such as being punctured or disturbed by others. Another cause can be from electrolysis or galvanic corrosion.

Since the line was only about a year old a partial replacement was the sensible solution. The tap connection was shut by excavating under the opposite sidewalk – where the city main was located. Then two other excavations were made on either side of the point of the leak. This procedure avoided excavating inside a concrete bus pad that had been already disturbed by others. A concrete bus pad costs thousands of dollars to properly restore to NYC DOT code. 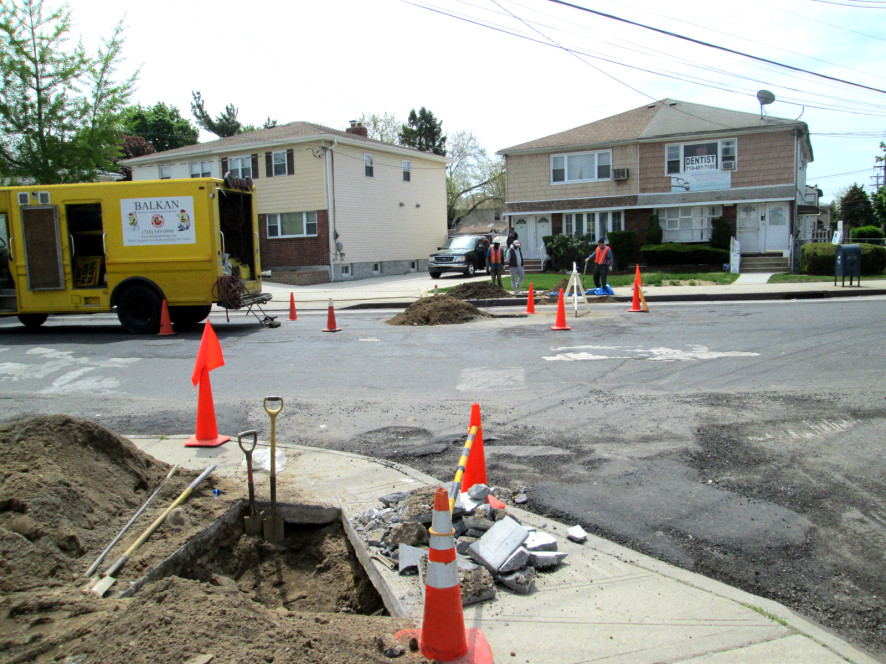 After the tap was closed and tunnels were made from hole to hole, the defective portion of the line could be removed. What quickly became apparent was that stray electric current had damaged the buildings water supply line and caused it to fail prematurely. This was evident by green discoloration and pitting on the surface of the copper. In one area of the copper the electrolysis had eaten a hole completely through.

Simply replacing the copper with new copper would not be a long-lasing solution. Instead 2″ pvc tubing was installed as a transit around the new copper. As the condition was localized, this would protect the new line from any future damage. All the work was completed in one day and the site was left broom clean. The two disturbed sidewalk flags were restored the following day by an in-house Balkan cement crew.

How can a water supply line be protected from electrolysis?

In most cases installing a new water supply line through a plastic sleeve will provide proper protection from electrolysis. This would also protect against galvanic corrosion as well. PVC tubing one or two sizes larger than the water service line itself can be used as the transit. Another material frequently used is plastic irrigation tubing. Where the copper swings into the tap connection special insulating tape must be carefully applied. 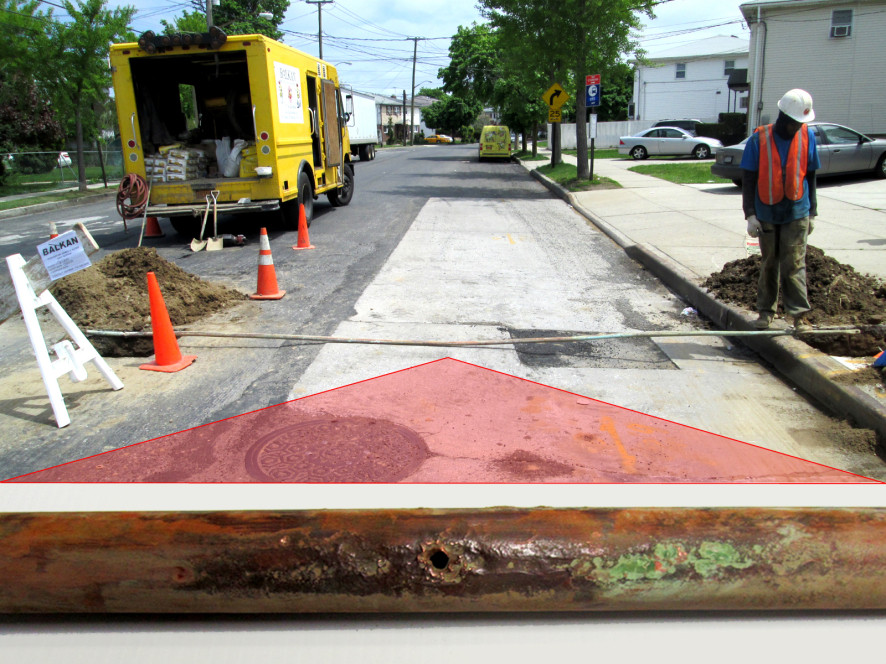 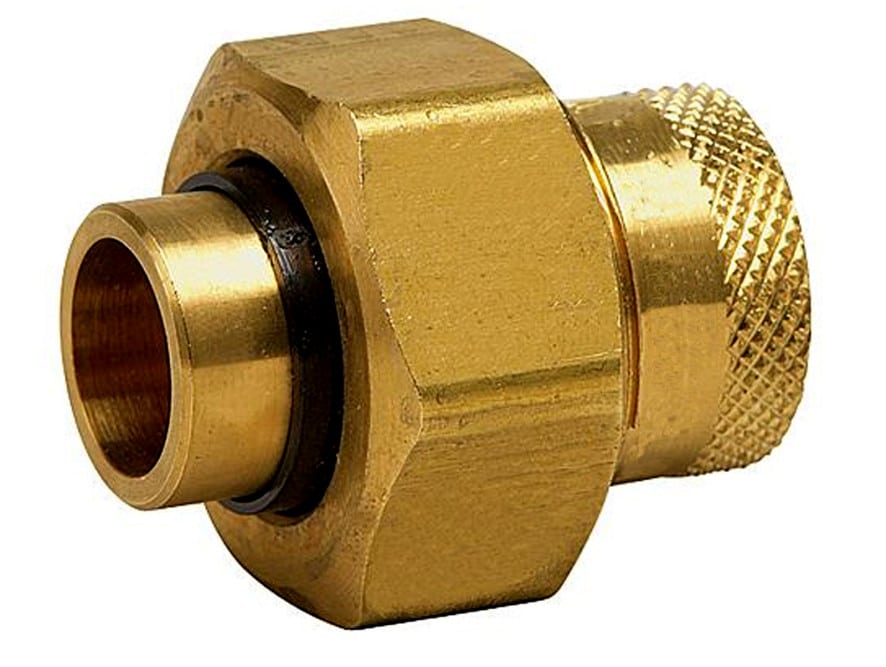 Can electricity jump from line to line?

Sometimes the origins of water supply line electrolysis can be hard to determine. This is because stray electric current does have the ability to jump from line to line. That means it can literally jump from a power supply line, to a phone conduit (that is not meant to transmit electricity), then to a water line.

In the case of the electrolysis highlighted above, the only underground facility in the area was for phone lines. It can only be assumed that stray electric current jumped from a power line to phone lines somehow. But that is an assumption that would take costly testing to determine for sure.

The difference between galvanic corrosion and electrolysis

Most times an underground water supply line shows pitting or a green discoloration it is referred to as electrolysis. In more cases than not, it is actually a galvanic action. There is a big difference between the two. Electrolysis, or electrolytic corrosion is caused by stray direct current (DC current). It is typically found near elevated train tracks, and was more frequently found when trolley cars were prevalent. A copper water supply line is much more prone to damage than a galvanized or lead water supply line. This is because copper is a much better conductor of electricity. 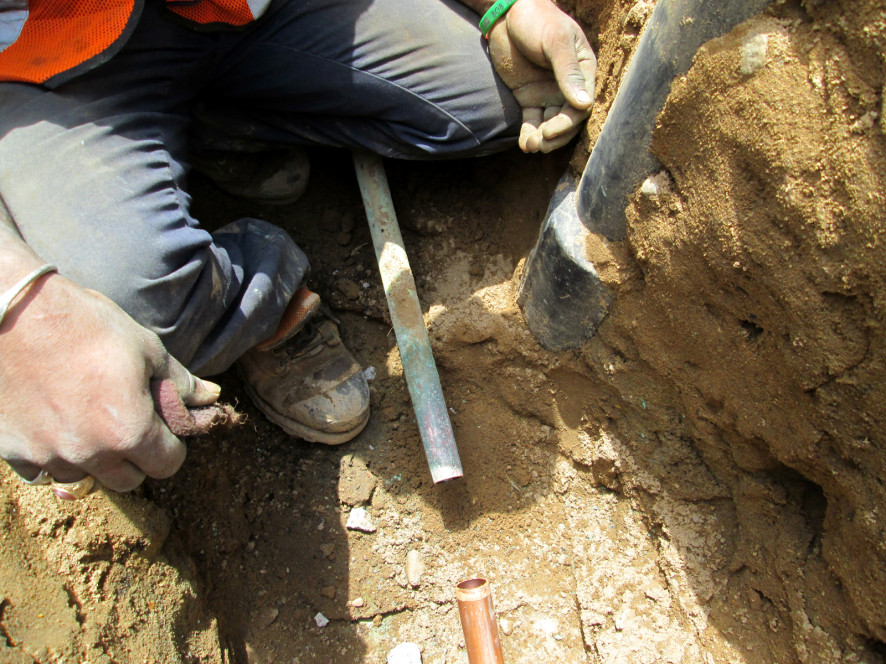 More commonplace than electrolysis nowadays is a water supply line being damaged by galvanic corrosion. Galvanic corrosion occurs when dissimilar metals come into contact with each other. A water supply line can also be damaged when it is very close to a dissimilar metal line. This is because water, and especially salt water is a conductor of electricity.

A copper water supply line should never be in direct contact with another underground utility. An example would be a copper main in direct contact with a cast iron gas main or a steel duct. Even when in close proximity it is a good idea to place a plastic insulation between the two unlike metals. Galvanic pipe corrosion is much more common than damage from electrolysis. The term electrolysis is frequently misused, and the actual cause of the damaged pipe misdiagnosed.

Underground sewer and water supply line work is considered a specialty in the licensed plumbing industry. Joseph L. Balkan is a company established for over 60 years, and is still family owned and operated. When it comes to the intricacies of working underground in NYC, no one is more knowledgeable than the Balkan Team.

Count on Balkan for free and no-obligation site visits 7 days a week. Calls are responded to by a highly trained team of professionals day and night.