A water main emergency occurred late in the evening this past Friday at a Jewish Center in Jackson Heights Queens. The Jewish Center had noticed an accumulation of fresh water during the day and received a Three Day Notice to repair their water main from the NYC DEP. However late Friday night the leak worsened – their basement was filling with water and their elevator shaft was filling up as well. They called for emergency plumbing service around 10 P.M. on Friday – and hoped for the best! 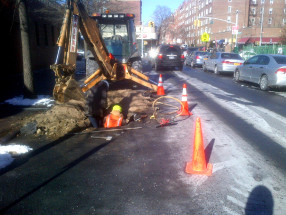 Little did they expect a full crew on site the next morning on a Saturday – but that is the service they received from Balkan Sewer And Water Main Service. In just a couple of hours Balkan closed both the wet connection for the fire sprinkler main and the tap connection for the domestic water service line. One would think ‘problem solved’ – but water lines running underground frequently present unexpected issues. In this case the water leak did not lessen, even after some time had passed. It soon became apparent that the leak was from another source which was most likely the city water main itself. It seems that when there is great temperature change the larger mains crack more frequently than at other times of the year. The smaller service lines are less affected by changes in weather. 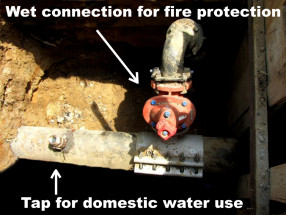 When the DEP issues a Three Day Notice they are usually extremely accurate, over 95% accurate. But no one can see through the ground, and a small percent of notices are given in error. When that happens, like in this case, the 311 system is utilized to notify the DEP. The 311 system allows for filing a detailed complaint report and receiving a complaint number. The NYC DEP typically responds in a timely manner. At this job location in Jackson Heights they  responded in a little over a half hour, no one could expect better than that. They quickly determined that the city main was broken and dispatched a repair crew. The DEP also noted in their records that the water service line for the building was not broken.

When a Three Day Notice is issued in error there is a claim process for the property owner to attempt to recoup the expense. Balkan provides claim forms and clearly itemized bills free of charge to help their clients expedite the process. Even when a notice is issued in error timely and professional response by a Queens water main contractor is vitally important. Any delays would have resulted in extensive damage to the Jewish Center including their elevator system.

A little bit about the Jewish Center of Jackson Heights 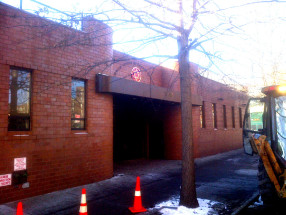 The center covers 6,000 square feet. It is a one-story structure with curving masonry walls throughout. The sanctuary seats 200 plus and serves as a dual-purpose room for religious ceremonies and center activities such as dinners, meetings and dances. Other features of the this facility include a modern kitchen, classrooms and additional meeting space. With beautiful and magnificent skylights together with 10 stained-glass windows brought over from the original synagogue the center is a masterpiece and one of its kind.

What is a wet connection?