A Vitrified Clay Sewer Pipe Can Last Hundreds Of Years

Clay sewer pipe is technically referred to as vitrified clay pipe. It has a strength and durability that far exceeds most people’s expectations. In many homeowners minds, and even to many licensed plumbers, clay sewer pipe is not given its just credit. It can be prone to root growth and to breaking prematurely. However that is far from the full truth, and belies the fact that vitrified clay has been used for over four thousand years. There are still some ancient sewer systems that continue to function to this very day.

Clay Y for a house connection

Environmentally speaking, clay sewer pipe may be the ‘greenest‘ pipe produced. It is made from recycled clay and earthen clay, with other organic ingredients added. These ingredients are mixed together without using any chemicals, just water. After the mixture is formed into the desired length and width, it is left to dry for about 24 hours. The term vitrified refers to the fact that the pipe has to be fired in a kiln for 50 hours. At that point it has a ceramic like finish and is completely impervious to water and most chemicals.

Clay pipe is air dried and then is fired in a kiln for 50 hours. It is then considered vitrified.

The characteristics and strength of vitrified clay sewer pipe

In almost all instances clay sewer pipe is not affected adversary by chemicals such as acid. Acids are found more than one would expect, such as in manufacturing. As an example, ascorbic acid is used as a preservative in many food products. Some examples are soft drinks and flavored ices. If acidic waste water is not treated and ph neutralized, it can eat away cast iron pipe in a relatively short period of time. Clay sewer pipe, on the other hand, is unaffected by acids even if waste water is left untreated. That is one of the reasons why clay drain lines installed thousands of years ago are still visible and functional in certain parts of the world. Clay sewer pipe is still the ideal material for many drain applications to this very day.

Modern clay drain pipe is carefully tested to over 2,000 pounds of water pressure, far exceeding any load it will bear when in use. A resin is carefully applied inside the hub and around the bald end of each piece of pipe to form a water-tight joint when connected together. One of clay sewer pipes disadvantages is that it is heavy. Its weight makes it more costly to transport and more difficult to handle than other drain pipe.

Because of the nature of the joints between clay pipes, clay sewer pipe is more prone to root intrusion than other pipe materials.

One of the downfalls of clay sewer pipe is its relatively low tensile strength. While vitrified clay has a relatively high compressive strength, it has a significantly lower tensile strength. What that means in layman’s terms is that a piece of vitrified pipe, like a piece of pottery, is very hard to crush. However when not supported properly, or under extreme pressure form the like of tree roots, it will snap. That is why when clay sewer pipe is used, it should be well supported, and ideally encased in concrete. 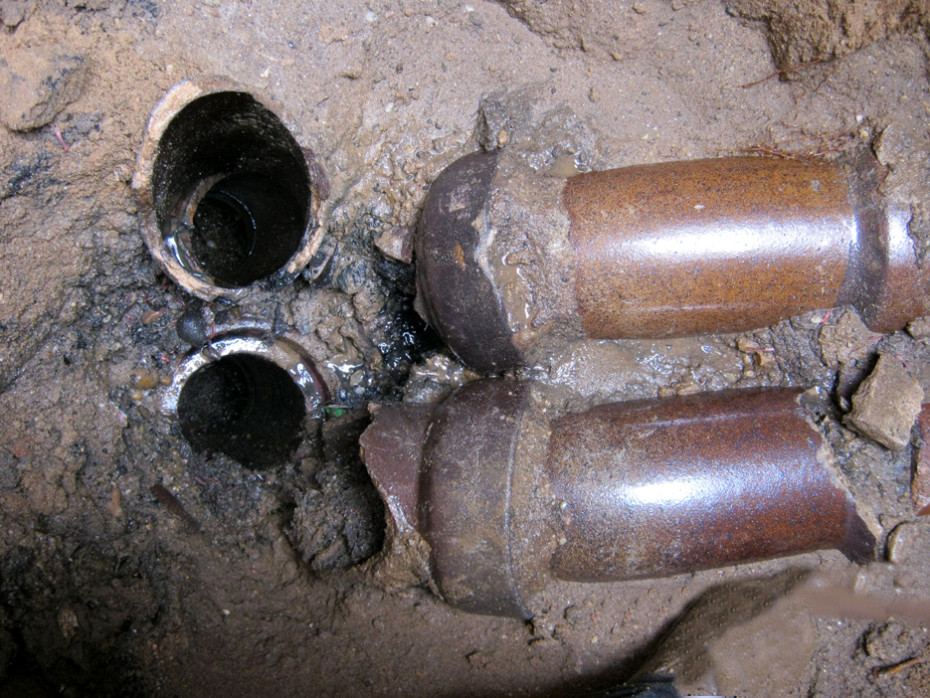 Clay is still routinely used in public sewer systems such as in NYC. It is typically encased in concrete or has a concrete cradle placed underneath it to provide added support and strength. For house sewer installations extra heavy cast iron and pvc has become the material most widely used across the U.S.A. Each different type of pipe material has unique properties that provides benefits over another. However it is widely held that extra heavy cast iron pipe is the product of choice. In a city like New York where trees are prevalent cast iron’s ability to withstand root infiltration is a great benefit. In addition it has a greater ability to withstand ground shifting during climate changes.

For a clay house sewer line to be more resistant to root infiltration and damage from ground shifting it should be encased in concrete. This adds cost and time to an installation, but is well worth it, and may be mandatory by local plumbing code.

When a clay sewer pipe breaks or becomes root infested

Diagnosing a sewer problem, then attending to its repair, requires skill  and frequently a license. Diagnosing a problem can frequently be done using an HD sewer video camera, and professional grade drain cleaning equipment. If in fact a sewer  repair or replacement is needed on clay pipe, hiring a professional licensed plumber is the best course of action. If you are a NYC property owner, consider Balkan Sewer And Water Main Service. Balkan has over 65 years of experience, is fully licensed, insured, and has the most modern tool sand equipment. Contact Balkan Sewer And Water Main Service for free and no obligation site visits seven days a week, and after hours as well.