Can There Be Unexpected Costs When A Water Line Leaks?

When a water line leaks which services a private property different municipalities may have their own code as far as responsibility goes. In NYC the property owner is fully responsible from the main control valve inside their building up to and including the connection to the city water main. In other words the City of New York bears none of the cost. Affected property owners should also worry about other costs associated with the leak. In many cases while the owner is deciding who to hire and how to arrange for the funds there are bad things going on underground.

Who pays for the leaking water? 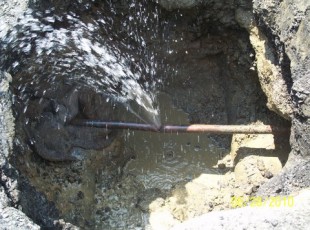 An erroneous concern is worrying about getting a tremendous water bill for the water leaking from a broken water main. In New York City property owners are only billed for water that passes through their water meter – owners are only billed for metered water. Since almost all water meters are located inside the building none of the water leaking from a defective service line appears on a water bill. If there is the unusual circumstance of a sidewalk meter, and the leak is on the house side of the meter, then someone could incur a tremendous water bill for neglecting a leak.

Leaks inside a building can also go undetected and result in large and unexpected water bills. When no water is in use in a building it is a good idea to check that the water meter is not moving. This simple check of the water meter should be done every few months.In New York City a property owner only get billed for water that passes through their water meter.

What if the roadway is washed out?

A true concern that most people overlook is a roadway washout from their water line leak. Most property owners understand that the roadway is public property and is maintained by the Department of Transportation. However what they fail to realize is that in NYC any damage caused by a property owners water main leak is the responsibility of the owner of the property to repair.

If a leak is neglected the cost of fixing a roadway washout can exceed the cost of the water main replacement. It does not matter if  the work was delayed due to lack of funds, lack of knowledge of the leak, or outright negligence – the property owner will incur the cost of repairing the roadway to code compliance. Whichever water main contractor performs the work, they are under a minimum of a three year roadway guarantee to the NYC DOT against future defects.If a leak from a property washes out the roadway, the owner of the property is responsible to fix the roadway washout.

Can there be other expenses?

Collapse over a cesspool

Running water from a leak can result in unexpected  damage in a variety of ways. If water penetrates a foundation wall it can be extremely hard to permanently repair. In many cases when the penetration for the new water service was properly sealed water can continue to seep in from other places due to damage caused by the original leak. This is yet another reason to act quickly when you suspect a water line is leaking. Having to water proof a foundation wall is a job that can easily exceed the cost of a complete water line replacement.

Some sound words of advice

While it is rarely advisable to rush into a hiring decision, it is even less advisable to procrastinate when it involves a water line leak. Shopping around for the best possible deal may or may not save some money, but it can frequently cause hundreds if not thousands of dollars in associated damage. Another point to consider is the NYC DEP taking action to stop a leak. The DEP typically gives out a Three Day Notice and extensions on the notice are frequently available. However in the case of a leak causing an emergency condition they will send out a crew to shut a water tap connection without notice or without waiting the full three days. Besides being left with no water, there is a $1,000.00  shut down fee when the NYC DEP closes a tap.

Does the NYC water supply system have leaks?

For those of us that worry about a dripping faucet or a running toilet the following information from Wikipedia may come as some comfort or serve as a shock. Apparently for over 20 years now between 20 and 36 million gallons of water a day leak from just one of NYC’s water tunnels. One particular County upstate has actually suffered from flooded homes.

The New York City water supply system leaks at a rate of up to 36 million US gallons (140,000 m3) per day. A complex five-year project with an estimated $240 million construction cost was initiated in November 2008 to correct some of this leakage in the Delaware Aqueduct. The work includes underwater diving teams of six divers who live in a 24-foot (7.3 m) pressurized tube that includes “showers, a television and a Nerf basketball hoop” in conditions designed to replicate those of their underwater work site. The divers breathe air that is 97.5% helium and 2.5% oxygen. The six divers descend 700 feet (210 m) to the work site where they work 12-hour shifts at a time.