Balkan Sewer And Water Main Service recently went through a 24 hour period that clearly illustrates that point. As the day progressed and one challenge was met, a new one arose. The conditions listed below show why knowing the right plumber to trust for emergency or planned sewer and water line replacement work  is so important. 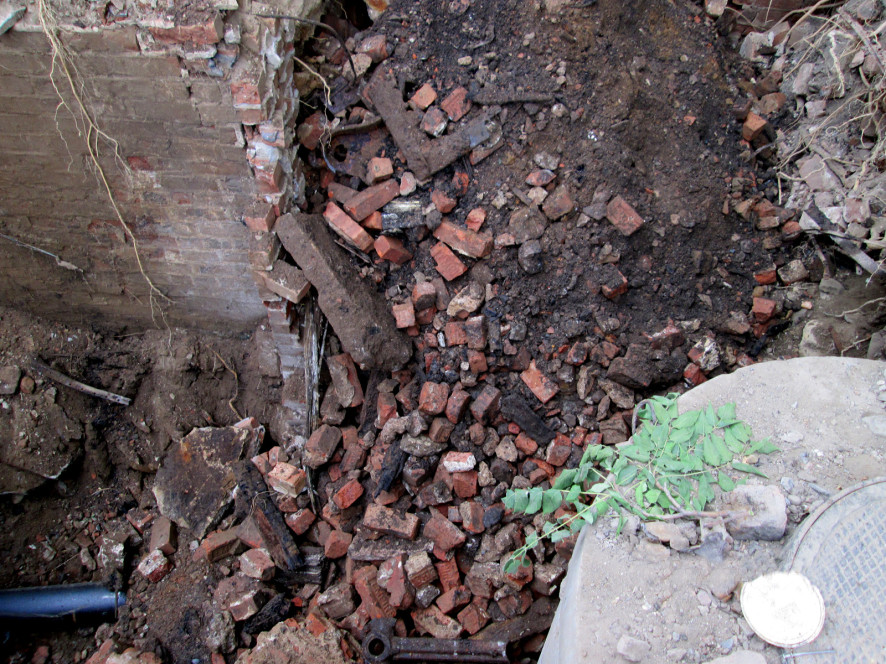 In most cases when a new building is erected it is built on the site of a previously existing building. It is common for a new building to share the same footprint as the old one, or be in fact be larger. In some cases the new building has a larger set back than the old one that was demolished.

Just such a case on Mother Gaston Boulevard in Brooklyn caused an unexpected early morning surprise for a new sewer and water line installation. Once excavation began three different old brick foundation walls were encountered. Each one had to be broken through in order to both do the installation and work safely.[twocol_one] 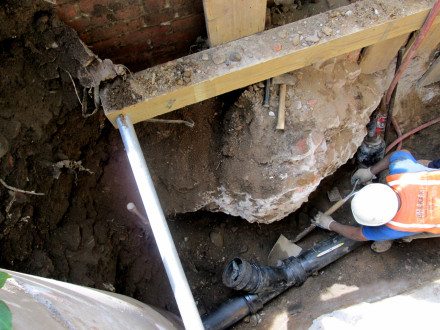 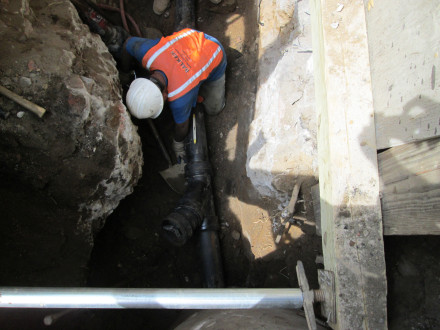 Rushing a sewer and water line job like this could result in injury or an improper installation. The Balkan Team handled the situation expertly, with only a minimum delay on the scheduled completion date. Hiring Balkan can pay unexpected dividends when obstacles are encountered.

Removing a large rock for a water line replacement

Encountering a large rock while performing a water line replacement can create an unexpected cost overrun for a customer and a delay in the installation as well. For an inexperienced water main contractor this can lead to some head scratching. 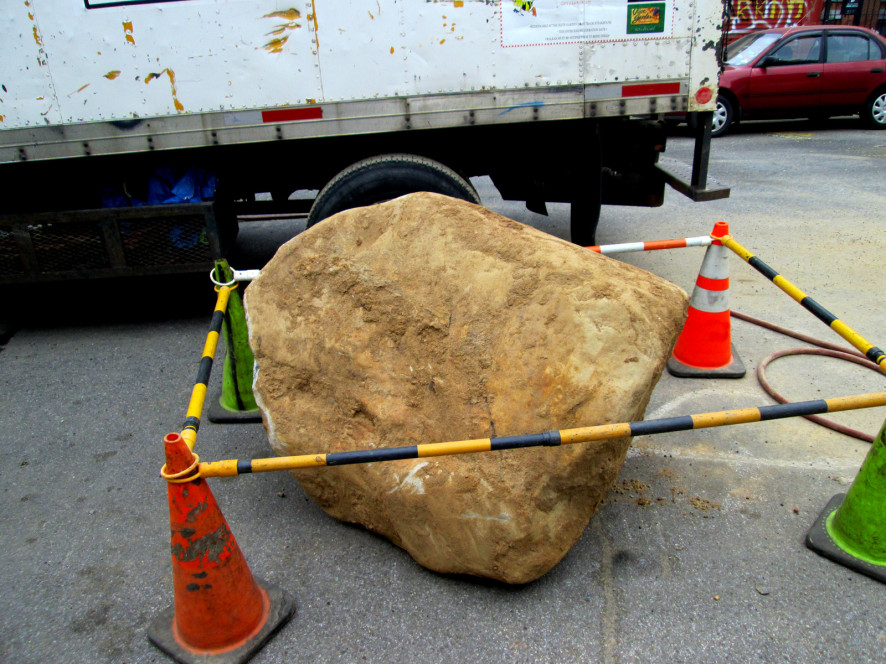 Great skill is required to remove a large rock

Rock breaking can add a substantial cost to a sewer or water installation. It can likewise cause a delay in completion possibly leaving a resident without service. In this case a skilled Balkan backhoe operator removed a large rock around 12 noon. This allowed for the same-day completion of a water line replacement, and at no additional charge to the client.

Get advice from an expert today! 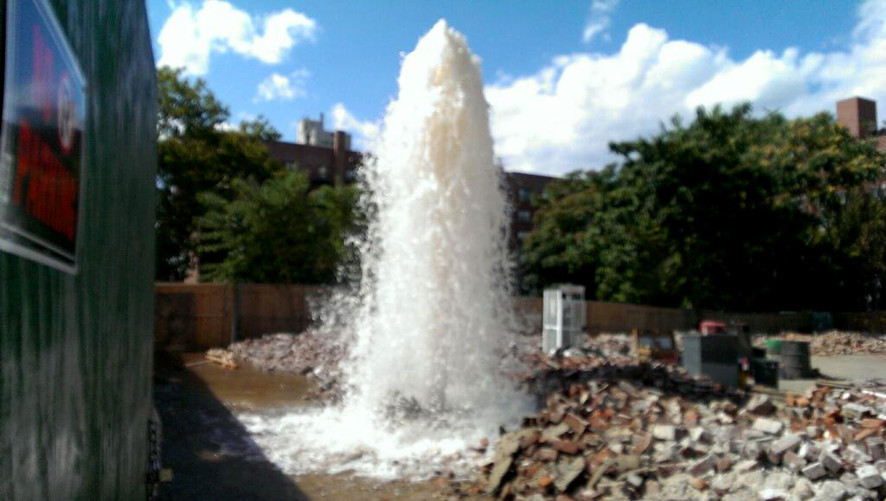 A geyser sprouts in Brooklyn

On this very eventful day at Balkan the fun really began around 3PM. That is when a demolition contractor came across a 6″ pipe sticking up out of the ground inside where a building once stood. Since it was in their way they proceeded to use a torch to burn off the bolts holding it together, one bolt at a time. When the last bolt was burnt out they had quite the surprise. The water line had not been plugged, but was live, and water gushed into the sky. 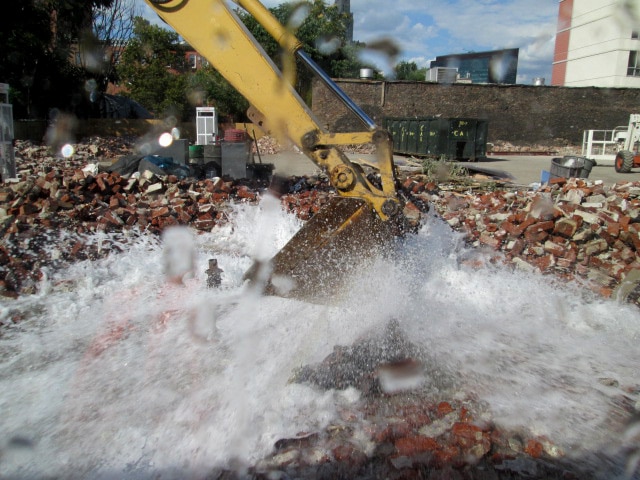 So on this day not only water line replacement work was giving Balkan a run for its money, demolition work was too. But even in a situation like this Balkan can save a client money and lost down-time. The DEP was called to the scene to open the roadway, find the connection, and close the water.

The DEP charges $1,000.00 for this service regardless of the time of day or the day of the week it is performed. It is commonly referred to as a shutdown fee. The $1,000.00 fee is a fraction of the cost it actually costs the DEP to perform this service. [twocol_one] 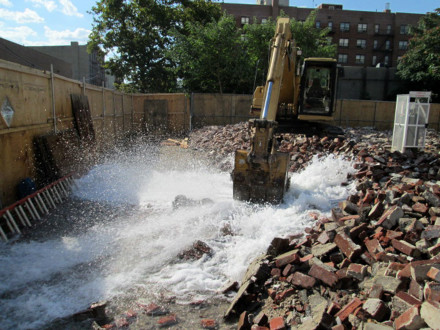 An excavator can only slow the geyser. 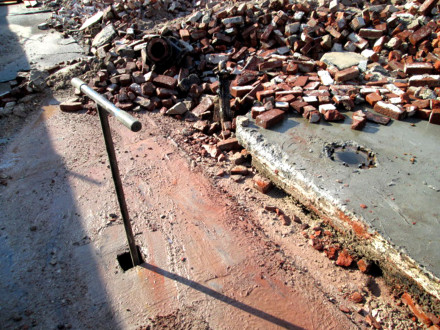 [/twocol_one_last]
Balkan saved the demolition contractor from a $1,000.00 shutdown and downtime by providing an almost immediate site visit in less than one hour. Within minutes an experienced Balkan Field Supervisor uncovered a curb valve in the sidewalk area. By working the valve back and forth the 6″ line was closed and the flooding condition was taken care of.

While certainly the above three challenges was enough for any day, the biggest challenge of the day was yet to come. Balkan was counted on the simultaneously offset a 12″ city water main, an 8″ fire service, a 6″ hydrant fire hydrant supply, and reconfigure a swing on a 2″ K copper service line. If you’re counting, Balkan had to rework four different water lines at the same time, and complete the task in one work shift during the night.[twocol_one] 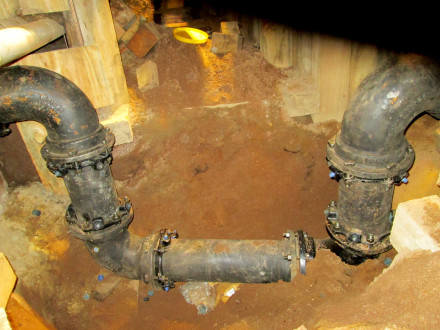 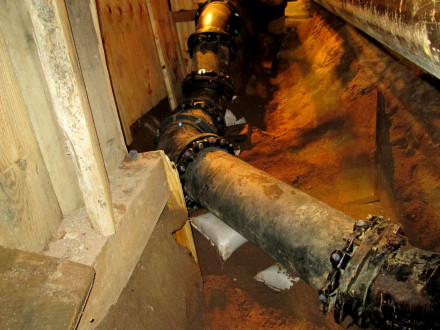 This is when being large enough to tackle any sewer or water main job, yet nimble enough to do careful coordination, comes in handy. Balkan mobilized an assortment of specialty tools and equipment to handle the task in the allotted time.

Thirteen men were personally supervised by Paul R. Balkan, a NYC Licensed Master Plumber. They all worked through the night, until sunrise the next morning. Acting as a team, this complicated and multifaceted job passed DEP inspection with little inconvenience to the surrounding neighborhood.

Trust the Balkan Team for any water line replacement challenge

No matter the obstacle or challenge Balkan will invariably have a cost effective and timely solution. Balkan’s 48,000 square foot facilities house an array of specialty tools, equipment, and materials.

Being established and running continuously for over 60 years has enabled Balkan to maintain it’s position as New York City’s largest and most trusted sewer and water line replacement contractor.

Get a free on site visit today