When a Brooklyn water main emergency occurs frequently same-day service is not an option, it is mandatory. Recently just such a situation occurred on Franklin Street in Greenpoint, Brooklyn. An environmental contractor was drilling test holes in the sidewalk area to test ground water for pollutants. However when they drilled through the sidewalk their auger went right through the water service line for one of the houses.

Accidents like this can happen even if the a contractor takes all proper precautions. Calling the NYC 811 system to have all utilities marked out is the law and was utilized in this case. However water service lines and the NYC water main itself are not part of the system. The NYC DEP is excluded from having to mark out their mains, and water service lines are the property of each individual property owner. 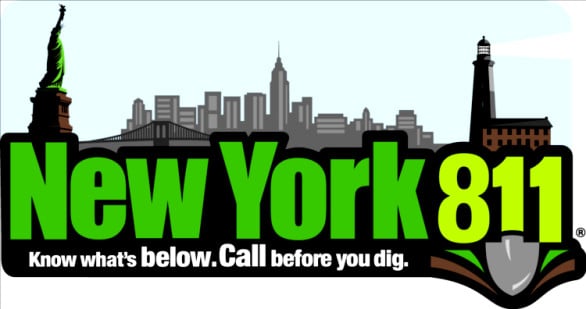 Because of the above facts water service lines such as the one struck in Brooklyn are susceptible to being disrupted or broken. Due to the nature of most types of utility work once a water service line is broken it is an emergency situation and needs immediate attention.

Unfortunately Greenpoint in Brooklyn has been subjected to many environmental hazards. Contamination has come from a litany of issues which include:

The above conditions do not include other hazardous waste violations and conditons. Viewing the site map below is a real opener (map is courtesy of toxictargeting.com).

At the location of this incident the contractor was drilling approximately 30′ deep to test ground water conditions. This is one step used to determine the extent of contamination or if contamination exists in a particular area. Needless to say any down-time due to a water line leak is extremely costly to the contractor performing this specialty work – not to mention the hardship this particular water main break caused the inhabitants of the building.

An electrical hazard is created and avoided 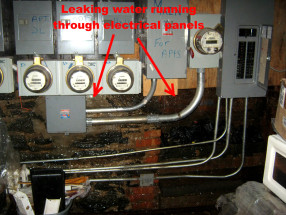 When this particular Brooklyn water line was ruptured is also created a secondary issue. The leaking water was running through the foundation wall and through a number of  live electrical panels. This was potentially a dangerous condition, one that could pose a threat to life if someone did something foolhardy.

Just as in many cases the FDNY (Fire Department of New York City) came to the rescue. The FDNY arrived on the scene before any other agency and acted quickly to shut the electricity to the building. Their quick response avoided a potential for grave injury. However this five family building and a store now had both now water and no electricity on a hot Summer day. If prompt repairs on the water main did not commence the next thing to flare might be tempers! 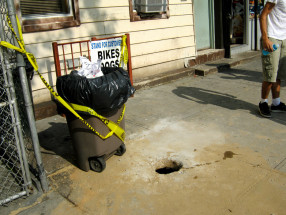 Location of the drill hole 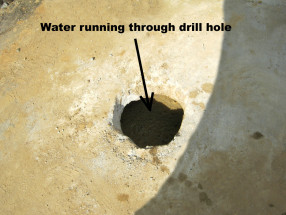 When a water main emergency occurs after the normal start of business it takes great organization and determination to mobilize a crew and provide service the very same day – Balkan Sewer And Water Main Service was called at 10:30 AM, which was well after all its crews had already been dispatched. Balkan’s response was swift, with an experienced Field Supervisor arriving on site within one hour of the call. The environmental contractor received an iron-clad price and an exact description of the work order.

Properly assessing the situation allowed for a repair on an existing copper service line to be performed. This saved the residents down-time and saved the contractor money on the repairs. In addition it assured all concerned parties that the water work would be completed the very same day the leak occurred. Starting and completing emergency Brooklyn water main repair work the very same day the emergency occurs is unique in the NYC water main and sewer industry – it is something Balkan accomplishes on a routine basis.

As a follow up all disturbed concrete areas were professionally restored by Balkan’s in-house cement crew the very next day.

About the Greenpoint toxic blob

courtesy of New York Magazine and written by Daphne Eviatar 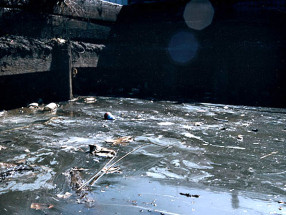 Ten million gallons of toxic gunk trapped in the Brooklyn aquifer is starting to creep toward the surface. How scary is that? On a foggy October day in 2002, Basil Seggos first saw the sheen on the surface of the water. He and his colleagues had launched an old wooden-hulled oyster boat from the Dyckman marina in Inwood, and headed south, down the Harlem and East rivers. They were on a mission to document fishing and crabbing spots on the riverfront so that local anglers could be warned not to eat their catch. When Seggos’s boat reached the mouth of Newtown Creek, the finger of water that separates Brooklyn from Queens, they decided to sail into the creek to check out its unnatural landscape—miles of waste-processing plants, gasoline-storage facilities, and abandoned refineries. The boat passed floating auto parts, crumbling bulkheads, and rusting pipes spewing filthy-looking water. Then, about a mile in, Seggos saw it: oil coating the surface of the water from shore to shore and extending upstream for another half-mile or so. “It was everywhere, all over the shoreline.” Officially, Seggos was running an outreach program for Riverkeeper, RFK Jr.’s environmental organization, and the organization’s protocol in situations like these is to stop and call the state Department of Environmental Conservation hotline. The call is supposed to provoke an immediate reaction, but no one showed up. The next day, Seggos called again. “We’d never even heard of a spill there before,” says Seggos. “But they told me they already had an open case on it and they were handling it.” Click to Read the full article.