Water Hammer And How It Can Damage Pipes And Plumbing Systems

Water hammer which is also called hydraulic shock can occur in various plumbing and piping systems. The primary cause is from fast-closing or fast-opening valves which cause water to bang inside a piping system. Inside a building or a home water hammer can be caused by a toilet, washing machine, or even a dish washer operating too abruptly or with too much water pressure.

A sign of a water hammer problem is a loud banging which can sometimes repeat itself or a noticeable vibration on the pipes. This causes a lot of stress on a plumbing system and can literally blow apart pipes. This typically happens at an elbow or an offset when the rushing water hits an obstruction or a turn in the plumbing system. Banging or vibrating pipes are conditions that should be addressed immediately.

Unlike air, which compresses easily, water does not readily compress. Water moving too quickly inside a pipe can damage plumbing – this is called water hammer.

Water hammer can occur even on a city water main 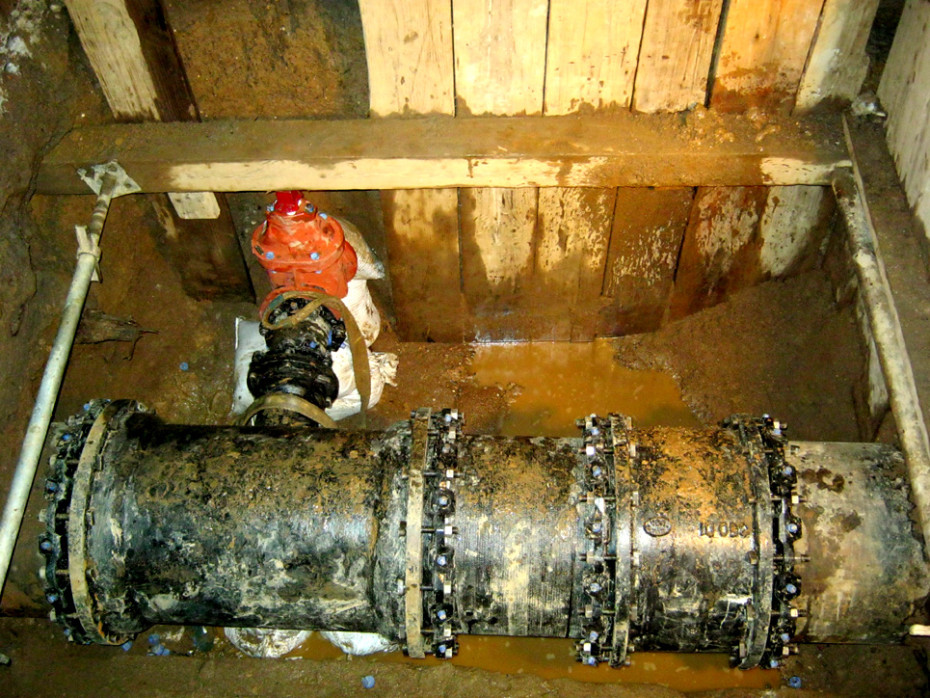 Section of a city main

It is very important that when the system is reactivated that the water is turned back on very slowly and that air inside the pipe is bled out by opening the fire hydrants. In addition any loose sediment should also be bled out through open hydrants. When repairs are done on a main water line sediment will break free and cause the water to be orange colored until all sediment is flushed out.Any time a NYC fire hydrant is used a hydrant use permit must be secured from the DEP.

When work is done on a city water main the main control valve for every affected building should also be closed to prevent sediment from entering into the house plumbing system. This also prevents damage from water rushing through the house plumbing when the city main is opened. After the city main is opened each house control valve should be opened slowly with a plumbing fixture open on the lowest floor.

Water hammer inside a house 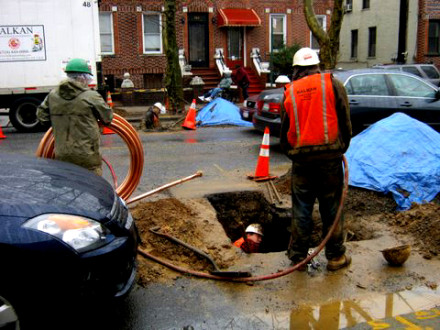 Another instance when water hammer can occur is when a water service line replacement or repair is completed. Any time plumbing work like this is done there will be air inside portions of the new water line or the house plumbing system. It is important that a plumbing fixture such as a sink is opened on a lower floor before the water is turned back on.  Then the water should be turned on very slowly so the air in the pipes can slowly escape.

Once water is running evenly throughout the house, the main valve can continue to be opened until it is fully open. Having some patience and opening a valve slowly will prevent banging and unexpected damage from rushing water. This is especially true when a quick opening valve is present such as a ball valve.

One of the ways to eliminate chronic water hammer and banging pipes is to install an arrester or a loop to the plumbing system. This is a loop or arrester in the plumbing system that is deliberately kept full of air not water. It serves as a cushion for fast moving water and will stop banging from water crashing against an elbow, offset, or plumbing fixture. These fittings or devices are also called dampers.

Some buildings are built with these loops or dampers. However over the years they can get filled with water and and cease to serve their purpose. When this happens they may have to be re-installed or emptied of the water. Sometimes a loop or an arrester can be reactivated by draining down the plumbing system and allowing air to re-enter the loop. When water hammer is caused by a fast closing toilet valve it can easily replaced by a slow closing valve.

Ball valves are typically not allowed on fire mains 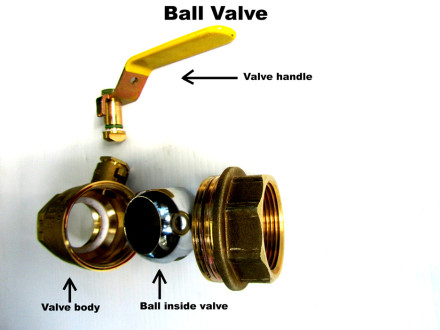 At least once a year fire sprinkler systems must be tested, which means closing and opening the system. If a ball valve was used there is a chance turning the handle too quickly would cause water hammer and damage the system. Any size ball valve needs only 1/4 of a turn to either open or close.

Even boilers and hot water tanks can be damaged from water hammer. It is important to close or open valves slowly at all times. When plumbing repairs are completed it is tempting to quickly re-activate the plumbing system. However, restraint must always be shown in order to avoid new and unnecessary repairs from being required.