Test For A Water Line Leak By Using A Meter

Properly testing for a water main leak requires expertise and skill – and even then errors can be made. There are various ways to determine if a line is leaking or the source of a leak. The water can tested, the plumbing  can sounded out, sometimes a dye test is appropriate. And least reliably one can assume that the visible point of the leak is the source of the defect. Because water seeks the point of least resistance, assuming that the line under where leak surfaces is defective is not a wise decision. One very accurate way of testing for a leak is by using a water meter.

Situations complicate determining the source of a leak 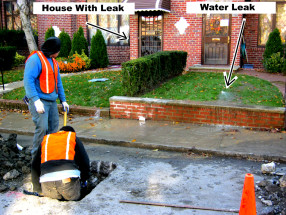 Leaks can be difficult to diagnose

It is advised to contact a professional licensed plumber or utilize the NYC 311 system in accurately determining the source and type of a water leak. 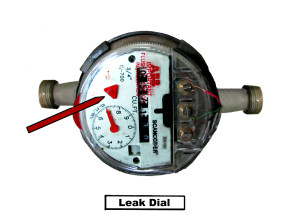 Just about all buildings in New York City now have a water meter. The meter is connected just on the house side of the main control valve on the main service line. The main water line will be the largest drinking water pipe inside the house and have a ground clamp from the electric box for the house attached to it (There shouldn’t be any electricity flowing through the electric ground wire – It is a backup meant for safety in case the main electrical ground fails). On the top of the water meter is a dial with various indicator dials that move or spin when water is being used. The smallest of the dials is referred to as a ‘leak dial’. If no water is being used in the house this dial along with all the other dials should not be moving. If all of the plumbing is turned off in the house and the dial on the meter is still moving then you have some sort of a water leak inside the house. Typically it is a running toilet, but it can be something more complicated than that. 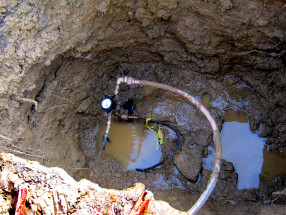 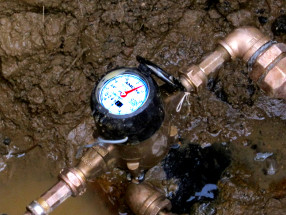 Closing the tap on the City main may stop a water leak, but that still doesn’t mean that the water service line is broken. Closing the tap connection will also stop a leak inside the house, or stop waste water from flowing out of a defective house sewer. A recent situation In Whitestone Queens proved this point. The NYC DEP had responded to a neighbors call of water running into their basement and the owners for the attached house next door were not home. After determining that the situation warranted immediate action the DEP excavated and closed the tap connection for the house where the owners were away and the leak stopped. This seemingly proved that there was a leaking water line for that house – however that was not the case.

Joseph L. Balkan Inc had just replaced the line that was assumed to be defective a month ago. It seemed extremely unlikely that the same water line was broken again, but Balkan arrived nonetheless to stand behind the ten year unconditional guarantee. Upon excavating and re-opening the tap no water appeared to indicate that a leak was present. Balkan then did a meter test and contacted the NYC DEP. It turned out that a defective sewer for the house was causing sewer water to flood the neighbors basement. That was why when the tap for the service line was closed the leak stopped.

Get a FREE on-site visit today!

Only because a meter was installed between the tap and the service line could it positively determined that the line was not leaking. Part of that test also involves closing the main control valve inside the house in case something inside the house is leaking. By inserting the meter, then re-opening the tap if was 100% positively determined that the service line was not leaking. Balkan is expert at performing all sorts of leak tests – this is another case where proper expertise solved a difficult situation with a proper diagnosis. [Read more about different types of water leak testing]