When a full sewer line replacement is needed frequently a home may have a front porch that extends past the front of the basement itself. In many cases the portion of the sewer line that is located under the front porch is left in place when sewer work is done. Because replacing a sewer line where it is not easily accessible entails additional excavation and concrete work, the homeowner may think it is better left alone. And many sewer contractors are not eager to do this additional work. Leaving existing sections of a house sewer line in place, particularly under a front porch area, can be a very costly mistake.

Why replace the sewer line under a front porch? 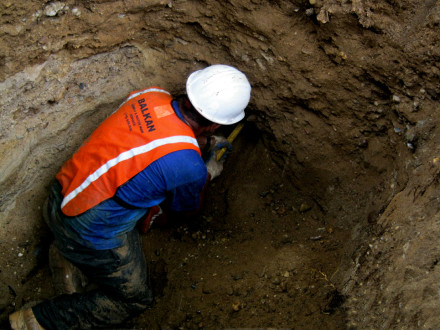 Tunneling under a front stoop

There are many reasons to replace the old sewer pipe under a front porch besides just the long-term cost savings. On older houses where vitrified clay sewer pipe was used the extra heavy cast iron transitions to clay under the porch – typically 3′ or 4′ out from the house trap. The two different materials were usually connected together using some oakum and a handful of cement – not a great way to join together pipe.

Over the years the joints between a clay pipe and a cast iron sewer line usually leak. This leakage washes away the supporting soil under the pipes. This can cause settlement of the pipe, and sometimes sewer water to leak into the basement. This is also a point prone to have root growth and blockages, as roots seek out moisture. If the front porch on the house was built after the house itself it can also be a point where the sewer pipe has been damaged or disrupted.

Are there any long-term cost savings?

Gaining access to the old pipe and then removing it requires some thought and skill, but it is the correct sewer job to do. The costs involved are a fraction of having to return at a later date and perform the work as a separate job. Typically to replace the pipe under a front porch also includes the installation of a new house trap and sewer access pit with a fitted cover. If this work is done in conjunction with a sewer replacement the typical cost would be between $1,500.00 to $2,000.00. Performing the same sewer work as a separate installation at a later date will typically cost two to three times as much. The cost difference can be thousands of dollars.

Is there extensive damage to the porch itself? 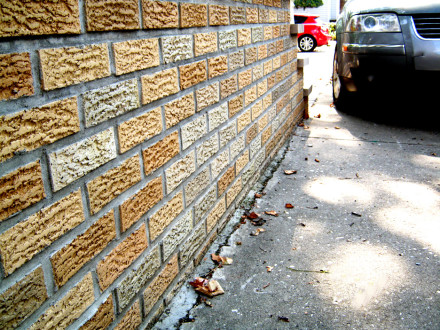 There are various methods to replace a sewer line under a front porch. Which method to use it determined by the construction of the the front porch itself – but none of the methods damage the front porch. Many times there will be access under porch or that area is used for storage. In those cases it is quite easy to dig a hole under the porch itself. In other cases where cinder blocks were used as the material for the foundation wall between the basement and the porch a few can easily be removed to gain access.

The most difficult case to gain access is when the porch is a solid concrete structure completely filled with dirt. In those cases a tunnel must be made from the sewer trap pit to an excavation made in front of the porch, also called a stoop. In some cases the original pipe is 6″ and a new 4″ pipe can be slid through it without extensive tunneling. In most residential houses in NYC 4″ pipe is legal and proper to use from the house up to the property line of the premises. 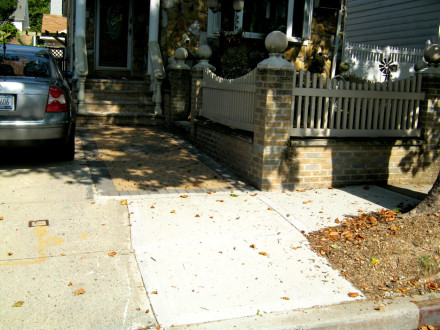 Recently our firm was called to a house in Queens where another sewer contractor had performed what was thought to be a full sewer replacement. However the other contractor failed to replace the pipe under the front porch. If done at the same time the cost would have been around  $2,000.00. Instead the sewer was only replaced from the outside front of the house to the city sewer. The previous contractor left back-pitched pipe from the house trap to the outside front of the house.

In addition to now having to perform addition sewer work itself additional restoration was involved as well. All the disturbed areas including brick pavers in front of the house had already been restored by the time the problem was discovered. After having paid for what they thought was a full sewer replacement, this was an unexpected and distressful situation for the homeowner to say the least. 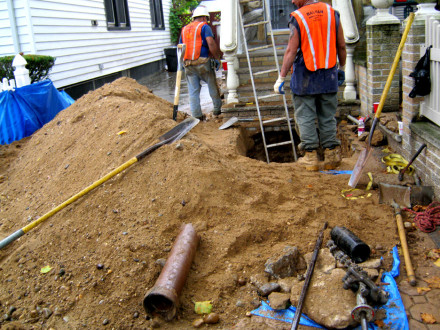 Balkan did indeed find that the pipe left in place was badly back-pitched and excavations needed to be made both inside the basement and in front of the house. A tunnel was made connecting the two holes and new extra heavy cast iron was installed with proper pitch. A new house trap and sewer access pit with a fitted cover was installed as well. However instead of the work costing around $2,000.00 if it had been done correctly the 1st time, it cost over $5,000.00 not including restoring the brick pavers for a 2nd time. This is a prime example of why to do it right the first time.

Not only did the homeowner suffer a great additional and unnecessary expense, but the previous sewer contractor had damaged their reputation and credibility. 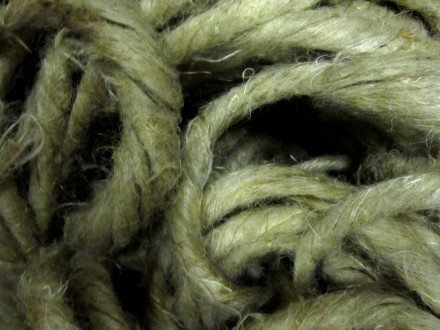 Oakum is a preparation of tarred fibre used in shipbuilding, for caulking or packing the joints of timbers in wooden vessels and the deck planking of iron and steel ships, as well as cast iron pipe plumbing applications. Oakum was at one time recycled from old tarry ropes and cordage, which were painstakingly unraveled and taken apart into fiber; this task of picking and preparation was a common penal occupation in prisons and workhouses.

In modern times, the fibrous material used in oakum is derived from virgin hemp or jute. The fibers are impregnated with tar or a tar-like substance, traditionally pine tar (also called ‘Stockholm tar’), an amber-colored pitch made from pine sap. Petroleum byproducts can be utilized for a tar-like substance that can also be used for modern oakum. White oakum is made from untarred material.

Oakum can be used to seal cast iron pipe drains. After setting the pipes together, oakum is packed into the joints, then molten lead is poured into the joint, creating a permanent seal. The oakum swells and seals the joint, the “tar” in the oakum prevents rot and the lead keeps the joint physically tight. Currently other methods, such as rubber seals, are more commonly used.