Water service line emergencies can happen at any time and on any day of the week. On a recent weekend a homeowner in Jamaica Estates, which is located in Queens, completely lost all water supply to their house. This was very unusual in that typically a leak will slowly develop and become visible long before water service is interrupted to the building. However in this case a family was left with no water supply over a summer weekend and water pouring out of a newly paved roadway.

Balkan Sewer And Water Main responded to the scene and provided water supply to the premises at no additional charge to the replacement cost of the water service line – having the expertise to aid a client in distress came in very handy in this case. 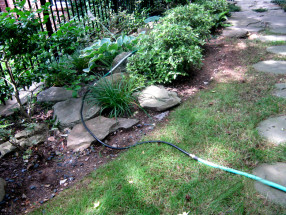 When a water service line is ruptured or the DEP turns off the tap connection frequently temporary water service can be restored easily by an experienced plumber. The process involves connecting garden hoses from a neighbors hose connection to the hose connection for the affected house. A coupling must be placed between the two connections, or a washing machine hose can be used in place of a coupling. Before the two hose connections are turned on to restore service the main control valve for the leaking water main must be closed so the water from the hoses does not leak back out through the leaking water line.

Before the hose connections are turned on a faucet should also be opened in the house with no water so any air can escape from the plumbing system. Carefully opening the water and allowing air to escape will avoid damaging plumbing by what is referred to as ‘water hammer’ – which is water rushing through empty pipes and possibly blowing it apart .

The DEP closes the tap to prevent roadway damage

Because of the severity of this particular Queens water main leak and the fact that the DOT had recently paved the roadway the tap connection had to be closed in order to avoid excessive damage. Leaving a heavy active leak over the weekend would have resulted in washing out and severely damaging the roadway. In this case the NYC DEP’s prompt response probably saved thousands of dollars in roadway damage.

Working on a carefully landscaped house 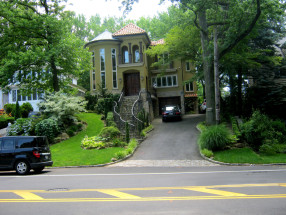 Site of a water main break

Securing required permits, mobilizing promptly, and installing a new tap connection the very same day are all part of properly serving the customer. But perhaps an even more important long-term concern is having proper respect for someone’s  property. On this job location the homeowners had taken obvious pride in all aspects of their house, from the landscaping, to the paving, to the house itself.  To do the owners justice would mean to treat their house with the care it demanded.

To ensure long-lasting restoration of all disturbed surfaces Balkan carted away all excavated soil and debris. Clean and dry backfill materials were brought to the site and all compaction of the excavations were carefully monitored by a certified soils technician highly experienced in using a Troxler Nuclear Density Gauge. In addition every excavation was sawcut around the edges to ensure a clean and neat finish. The final touch was restoring all excavations to a thickness that actually exceeded the surrounding areas. All of the above steps were taken by Balkan as standard operating procedure – not by ‘special request’ from the client. Extraordinary service is routine procedure at Balkan Sewer And Water Main. 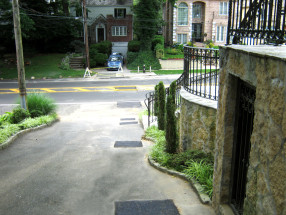 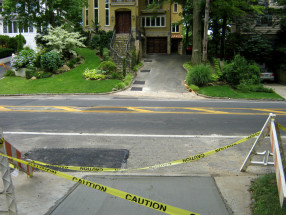 A little bit about Jamaica Estates in Queens, NY

Jamaica Estates was created at the turn of the century by the Jamaica Estates Company, which developed the hilly terminal moraine’s 503 acres (2.04 km2), while preserving many of the trees that had occupied the site. Jamaica Estates now has significant Modern Orthodox Jewish American and South Asian American populations. The latter has been particularly affected by the wave of mortgage foreclosures that began in 2008. The only apartments and multi-family housing lie near the southern border within a few blocks from and along Hillside Avenue. The shopping corridors are along Hillside Avenue and Union Turnpike.

In 2007, following the damage of the roof of the Historic Gatehouse in Hurricane Isabel, the restoration and beautification of the Gatehouse and Malls was completed.

The Jamaica Estates Association, founded in 1929, continues as an active, vital civic organization representing the community. An Historical Plaque was unveiled April 23, 2010, on the Midland Mall by The Aquinas Honor Society of the Immaculate Conception School and by the sponsor of the plaque, Senator Frank Padavan.

A personal note from David Balkan – Jamaica Estates is amongst the most beautiful neighborhoods in Queens. It is ethnically diverse and home to many prominent Queens residents. It is also noteworthy for the beautiful and distinctive architecture of many of it’s homes. It is typical for the residents of Jamaica Estates to take great pride in their homes which are kept in impeccable fashion. Carefully manicured yards, well kept landscaping, and a virtually litter free  neighborhood makes this area a very desirable place to reside.