Electrolysis And How It Affects NYC Water Service Lines

Why stray DC current is harmful to certain water lines 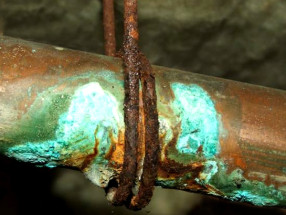 Different water main materials have different properties including how well they conduct electricity. As an example lead and ductile iron pipe are very poor conductors of electricity and are rarely affected by stray electric current. However copper and brass are very good at carrying electric current. That is why wiring is typically copper insulated with rubber or plastic. Unfortunately K copper water tubing, and brass to a lesser degree, is not meant to carry electricity. If stray electrical current travels through a copper water main it will usually rot out in a year or so and then leak.

Interestingly a lead water main may be unaffected for many years by stray current and problems may only become apparent when a new copper main is installed. Unfortunately many areas where electrolysis exists are not known at the time of the new installation – the problem does not become apparent until the new copper service line leaks. Many areas in NYC that are known to have stray DC current have remained unattended to for many years. One such area is Jamaica Avenue in Richmond Hill between Lefferts Boulevard and 127th Street under the elevated train tracks.

Signs of electrolysis – K copper will turn green and become pitted in a very short period of time if electrolysis exists. If these two symptoms are present do not take them lightly, proper precautions must be made immediately.

What can be done?

In New York City water service line materials for lines sized 2″ and less are limited to copper and brass, both are conductors of electricity. Non-conductive materials cannot be substituted. However very successful steps can be taken to avoid damage due to stray DC current, unless the condition is corrected by the utility provider themselves beforehand – These steps make the job much more costly than a typical water main replacement. 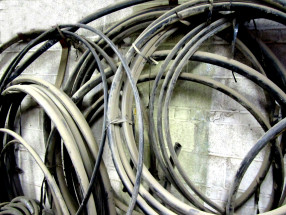 Balkan Sewer And Water Main Service has been able to provide long-lasting installations for new water lines by installing them through plastic tubing which is two sizes larger than the service line – As an example 2″ plastic tubing is used when installing an 1 1/4″ line. Where the copper has to be exposed, such as the ‘swing’ going to the tap connection at the city main, special insulating tape is used where plastic tubing cannot be utilized. In addition dielectric couplings should be used between the tap connection and the service line, and the inside plumbing and the service line. Installing dielectric couplings isolates the copper tubing from any possible electric current emanating from either the city water main or inside the house.

If no alternative electrical ground is installed there is a serious risk of severe personal injury from electrical shock and damage to your electrical appliances.

Needless to say a correct and proper installation as described above requires skill, expertise, special materials, and additional labor. However if the above steps are taken the water line replacement installation will be long-lasting as opposed to rotted out and leaking in a year or so. The additional costs to perform the correct water main replacement is better than paying twice and still not having the electrolysis issue properly addressed.

How good is your guarantee?

It is typical for a guarantee on a water main replacement to exclude damage from electrolysis. If the condition is unknown a contractor would have no idea that certain precautions have to be taken, and this exclusion is only fair. However frequently the condition is known and the contractor can use this exclusion as a means to escape responsibility for poor and irresponsible work. If you are one the few unlucky property owners to be located where underground DC  current exists, make sure an electrolysis exclusion is not part of you contract guarantee.

What exactly is a dielectric coupling?

In addition to a standard union, there exist dielectric unions which are used to separate dissimilar metals (such as copper and galvanized steel) to avoid the damaging effects of galvanic corrosion. When two dissimilar metals are in contact with an electrically conductive solution (even tap water is conductive), they will form a battery and generate a voltage by electrolysis. When the two metals are in direct contact with each other, the electric current from one metal to the other will cause a movement of ions from one to the other, dissolving one metal and depositing it on the other. A dielectric union breaks the electric current path with a plastic liner between two halves of the union, thus limiting galvanic corrosion.