Pipe electrolysis often happens when stray direct current (DC) electricity causes the pipe to decompose. However, copper pipe electrolysis can also potentially be caused by many modern appliances. Modern appliances tend to rely on solid state electronic systems. As an example, even a small hairdryer can create a tremendous amount of DC current. This direct current can then be sent through the grounding wire on a water service line, and distributed randomly underground. Because copper is an excellent conductor of electricity, it will attract any of this stray direct electrical current in the vicinity.

Dissimilar metals that touch can also create this problem. That is why it is important to keep other unlike metals, such as galvanized pipe, from coming in contact with your copper pipes. Something as simple as a discarded nail in the soil, or in your home’s duct work, can trigger electrolysis if they happen to touch your copper pipes! Copper pipe electrolysis also occurs with galvanized pipe, this is also known as galvanic action. 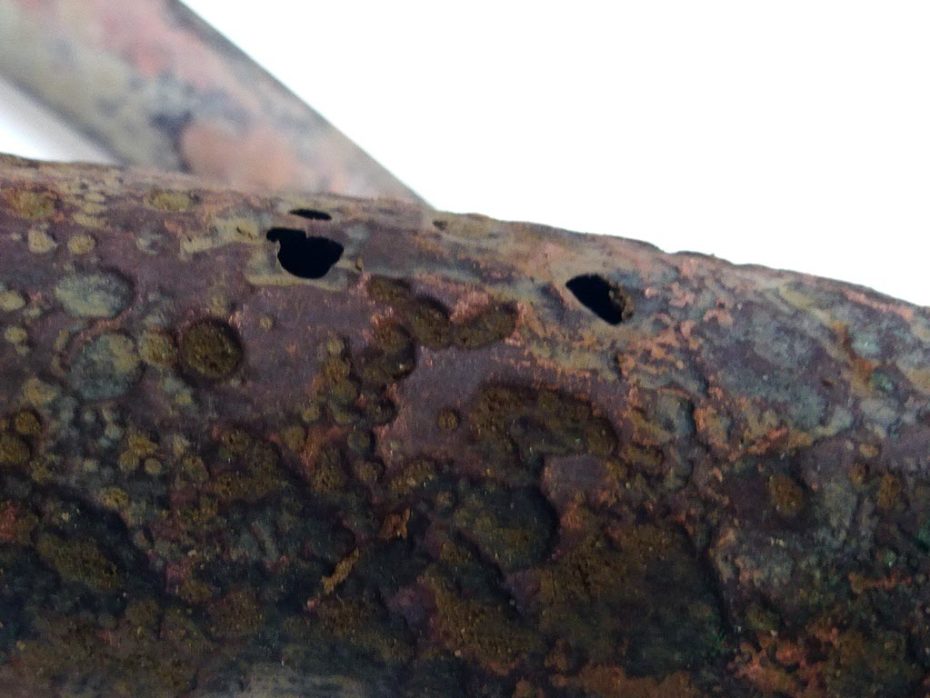 In what areas does water line electrolysis occur?

Historically copper pipe electrolysis has been a problem in certain areas of the city because of the DC electricity used by the MTA subway system. Leaking currents from the trains makes its way through the soil to nearby pipes. The alternating current (AC) used in homes and businesses does not pose the same threat to pipes. In some documented cases, damaged underground utility lines will also cause pipe electrolysis. In the case study below, a water main contractor actually created a condition of pipe electrolysis by performing a faulty installation.

However, electrolysis attacking water lines is now appearing throughout the metropolitan area of NYC. Recent studies seem to indicate that solid state appliances may be creating a rash of water lines destroyed by electrolysis in multiple neighborhoods. But regardless of the true cause, the dramatic increase in resulting water lien breaks is indisputable.

A case of underground copper pipe electrolysis in Brooklyn

Pipe electrolysis can sometimes be a self-created issue, as a recent job in Brooklyn proved out.  The existing water service for this property had been replaced less than three years ago. Yet this relatively new copper water line was clearly a victim of pipe electrolysis. Unfortunately for the property owner, the previous water main contractor did not perform the work to code, and actually damaged underground electrical utility lines during their installation. 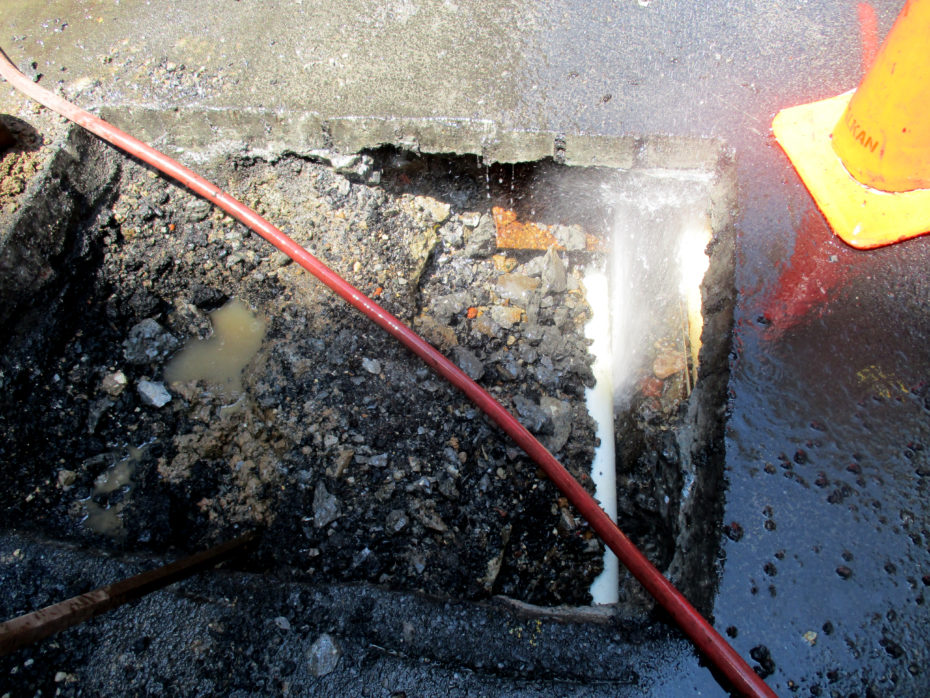 Defective main installed through a bank of ducts

Instead of carefully exposing underground utility lines, or installing the copper main at an appropriate depth, the line was installed 2′ deep. It was then forced through the electric ducts. By doing this, the protective transits for the ducts were damaged, and electricity was allowed to flow into the ground. Since the copper line was in close proximity, the electricity began to flow through the copper water main. Needless to say, K copper water tubing is not made to carry live electric current. Hence, in less than three years, the line was leaking and severely pitted from pipe electrolysis. 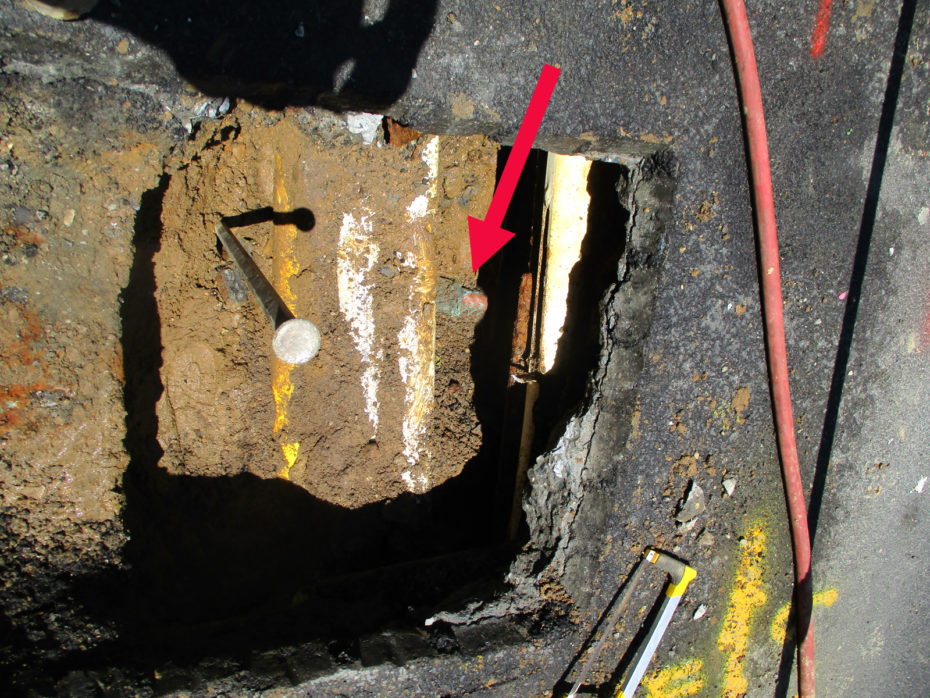 The new installation performed by Balkan Sewer And Water Main Service was done over 2′ deeper than the previous installation, and at a depth in excess of 4′ deep. Which was well below the electric lines, and beyond the reach any stray current. This particular Brooklyn water main replacement became a primer in the importance of choosing the correct water main contractor to perform an installation. As an added peace of mind the client received an unconditional ten year guarantee.

There are two primary solutions in preventing stray electric current from destroying your water service line. One is by using dielectric couplings; but is technically not permitted in many areas (NYC included). The other method is by completely encasing the copper water line in PVC plastic (or another appropriate plastic tubing), and using approved tape to wrap the areas of the copper tubing that cannot be installed inside plastic.

It should be noted that the American Water Works Association (AWWA) issued a policy over 20 years ago recommending that metal water service lines be isolated from metallic mains (such as gas mains). The AWWA also advised against the often required practice of grounding electrical utility service lines to water service lines inside buildings. Regardless, in most cases a 2nd precaution must be taken during the water service line installation. In fact the 2nd option described below is the preferred option. 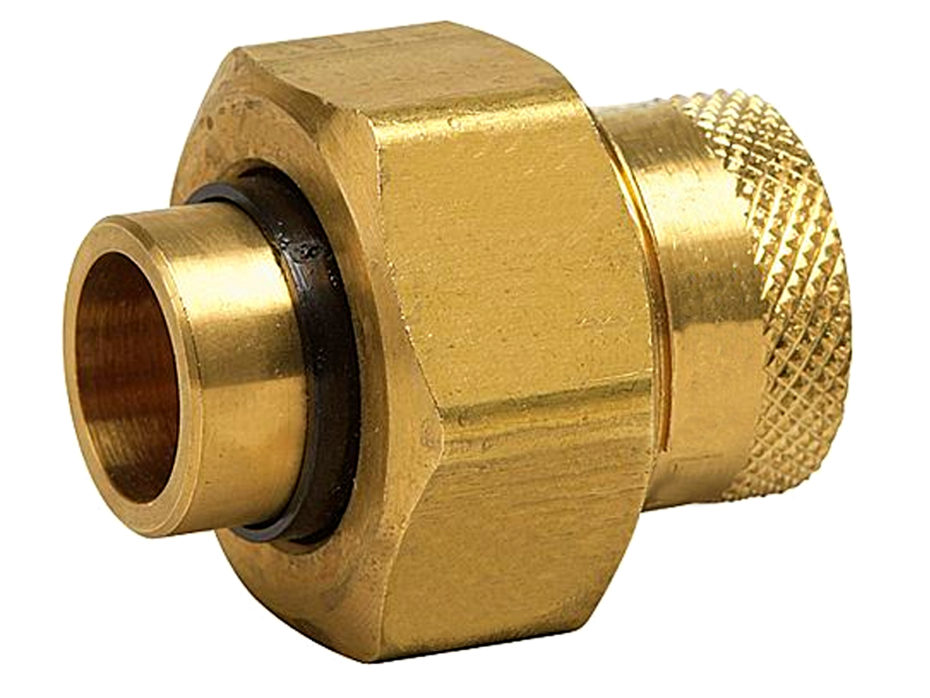 Install copper water lines through a plastic sleeve such as PVC

The more preferred option is typically done by installing the copper tubing inside of a larger diameter plastic tubing. Similar to copper electric wiring, it will insulate the K copper. Only instead of protecting you from electric shock, it protects the copper from exposure to electric current. This must be trusted to a skilled and licensed professional.

If you live in one of these vulnerable areas, it is important that you choose a Licensed Plumbing Contractor that understands copper pipe electrolysis: its causes, prevention, and treatment. It is most important that any contractor takes the proper and documented steps to prevent pipe electrolysis from reoccurring. Damage from pipe electrolysis is typically excluded from any guarantee, so hiring a trustworthy and knowledgeable professional is vitally important. Working on water pipes exposed to stray electrical currents also presents a danger to workers. Unless precautions are taken, workers can be exposed to electrical shocks. Yet another reason to hire none but experienced and licensed plumbers.

If you suspect that your copper pipes are suffering from copper pipe electrolysis, contact Balkan Sewer And Water Main Service. We guarantee that your problem gets fixed and stays fixed.